A Valheim player has managed to pull off the game’s fastest speedrun to date. Thanks in part to a bit of shockingly good luck. YouTuber NickRawcliffe managed to defeat all five of Valheim’s bosses in under 90 minutes, about 47 minutes faster than the previous record.

That might not sound like a particularly fast time for a video game speedrun, but NickRawcliffe did it in a survival game that features randomly generated biomes and boss locations spread out around a massive map. Under more normal circumstances, NickRawcliffe might have also been expected to go from a level one starting character and grind to something stronger. Thanks to the Valheim community’s rules for speedrunning, players can actually use a fully leveled up character. The challenge comes in actually finding the bosses, many of whom require very particular circumstances to actually spawn. 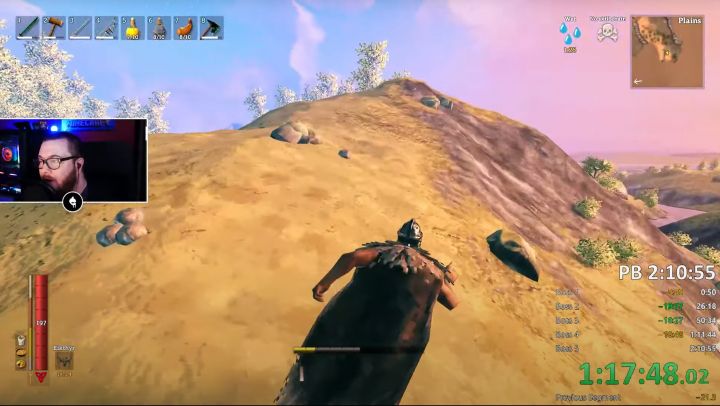 It’s a very difficult and time-consuming task, even with NickRawcliffe managing to kill the first boss, the electric Stag god Eikthyr, in one hit. After that, NickRawcliffe tracked down the gelatinous Bonemass boss through a swamp biome. That’s easier said than done, usually requiring a ton of sailing. Then you have to find a crypt, and that crypt needs to contain Bonemass’ runestone marker. Plenty of players will go through swamp biomes without ever finding a crypt, and even finding a crypt is no guarantee that the boss’ runestone will spawn. It’s annoying, but challenging in the way survival games often are. 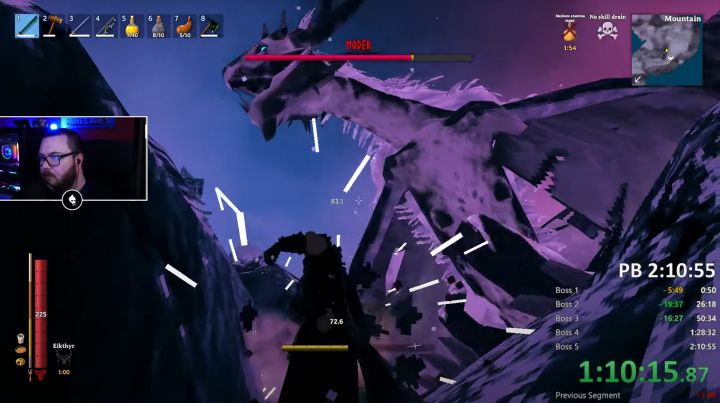 NickRawcliffe then set off to find the dragon Moder, who spawns in tricky mountain biomes that give Skyrim’s hills a run for their money. Again, it requires finding a rune marker that actually points out her location.

The best moment of the entire speedrun is when NickRawcliffe stumbles onto the spawn zone of the final boss Yagluth. Normally, Yagluth requires you to find a runestone marker to learn his actual location like other bosses. Instead, at the 1:18:30 mark, NickRawcliffe actually just spots it on the horizon off a goblin-filled coast.

It’s possible that NickRawcliffe’s speedrun will be beaten in the future, but it’ll take that person an incredible amount of luck and hard work.

If you want to get good at Valheim’s blend of randomly generated Viking survival and combat, check out our wiki section for guides on things like how to stay warm, how to tame animals, and everything you need to know about building in Valheim. [poilib element=”accentDivider”] Joseph Knoop is a writer/producer/wordsmith for IGN.