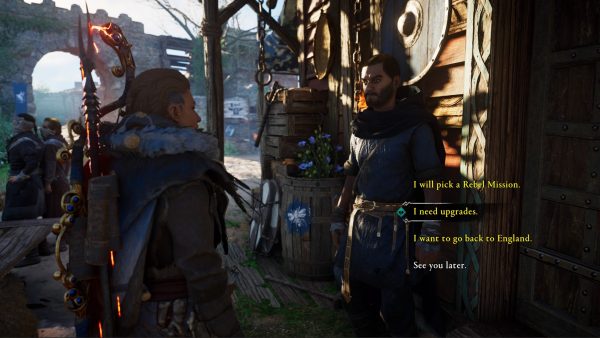 Charles the Fat has Francia in his grasp, but your Norse allies won’t give up lightly.

In the Assassin’s Creed Valhalla Siege of Paris DLC, Eivor can lead Rebel missions to weaken the Frankish forces and win themselves rewards.

Here’s everything you need to know.

After you first land in Francia, speak to Pierre in Melun. He’ll give you two options, the first of which opens the list of Rebel Missions. 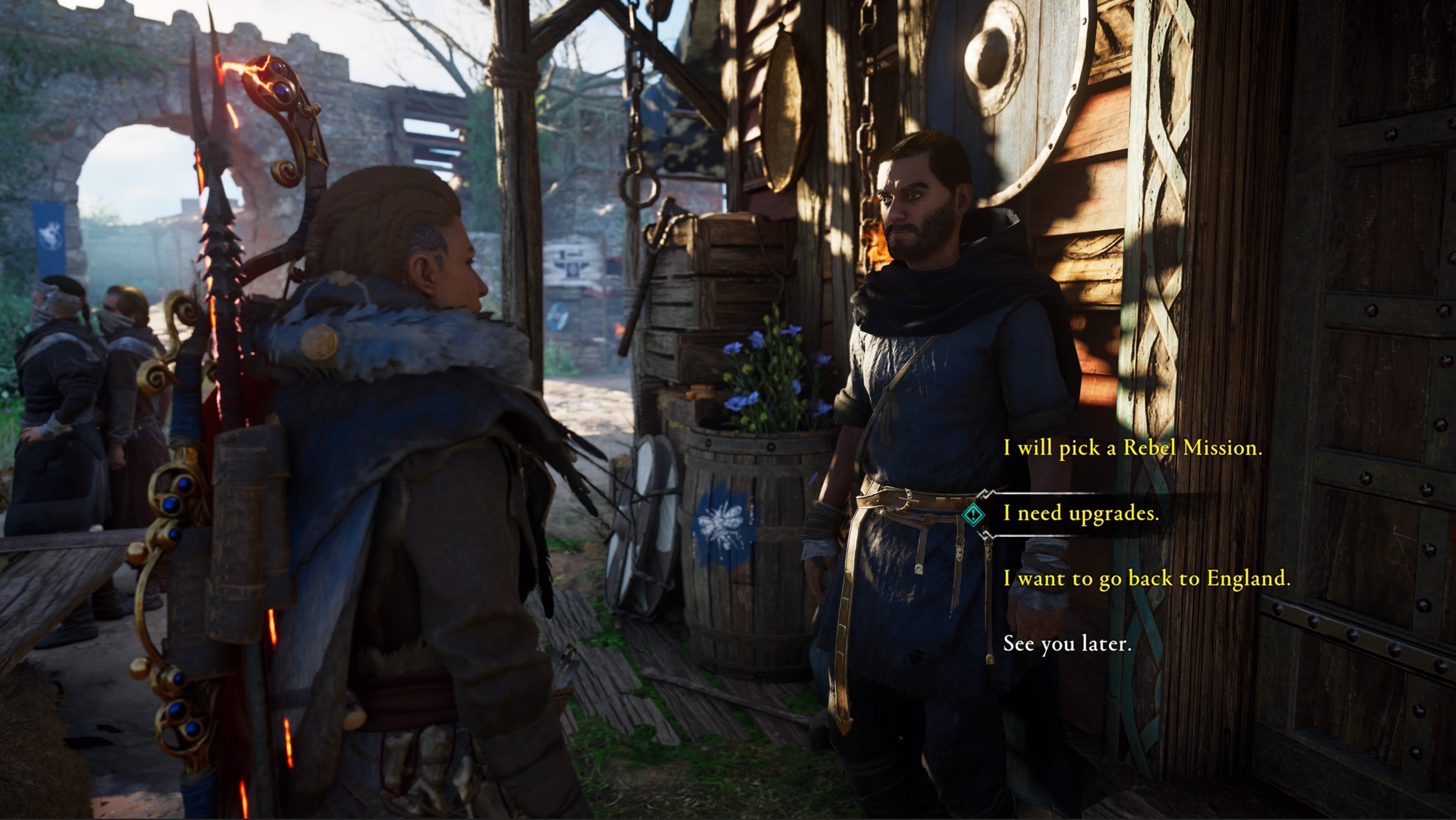 These are small, fast missions where Eivor aids the resistance to Frankish rule. You can either embark on solo missions, or strike out with an AI controlled team of either melee or ranged allies.

Different missions award greater or lesser rewards, but all contribute the same amount to your Infamy meter.

Infamy is the measure of success for your resistance.

As you disrupt the establishment more and more by completing Rebel Missions, your Infamy will grow towards the maximum level of 4. 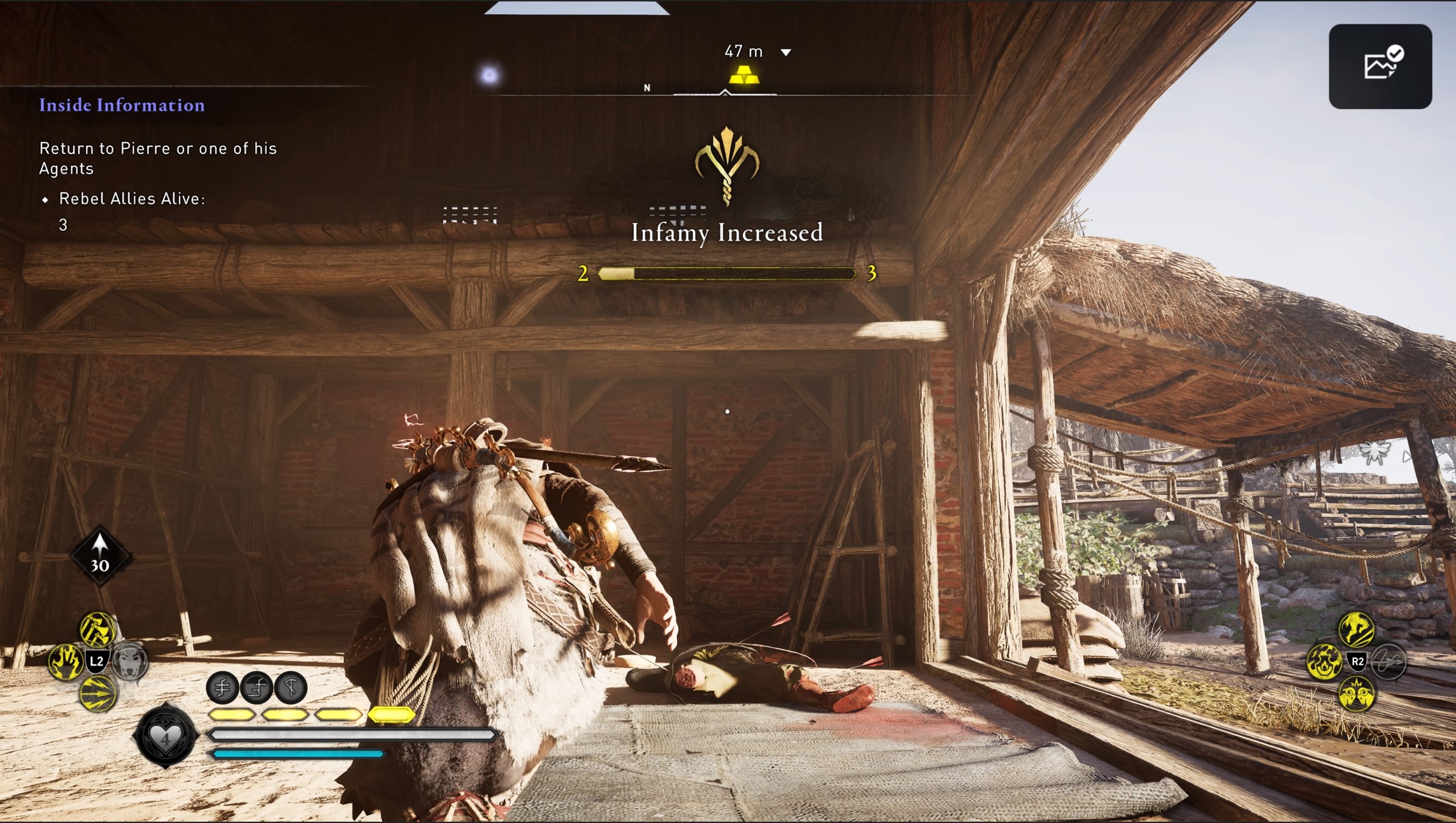 When your Infamy level increases, getting to the next level after that will take more missions to achieve. You’ll need to complete something like 12 Rebel Missions to raise your Infamy from 3 to 4 – so it’s a decent time investment.

The higher your Infamy, the more training upgrades you unlock for your AI companions. These are accessed from the second dialogue option with Pierre. 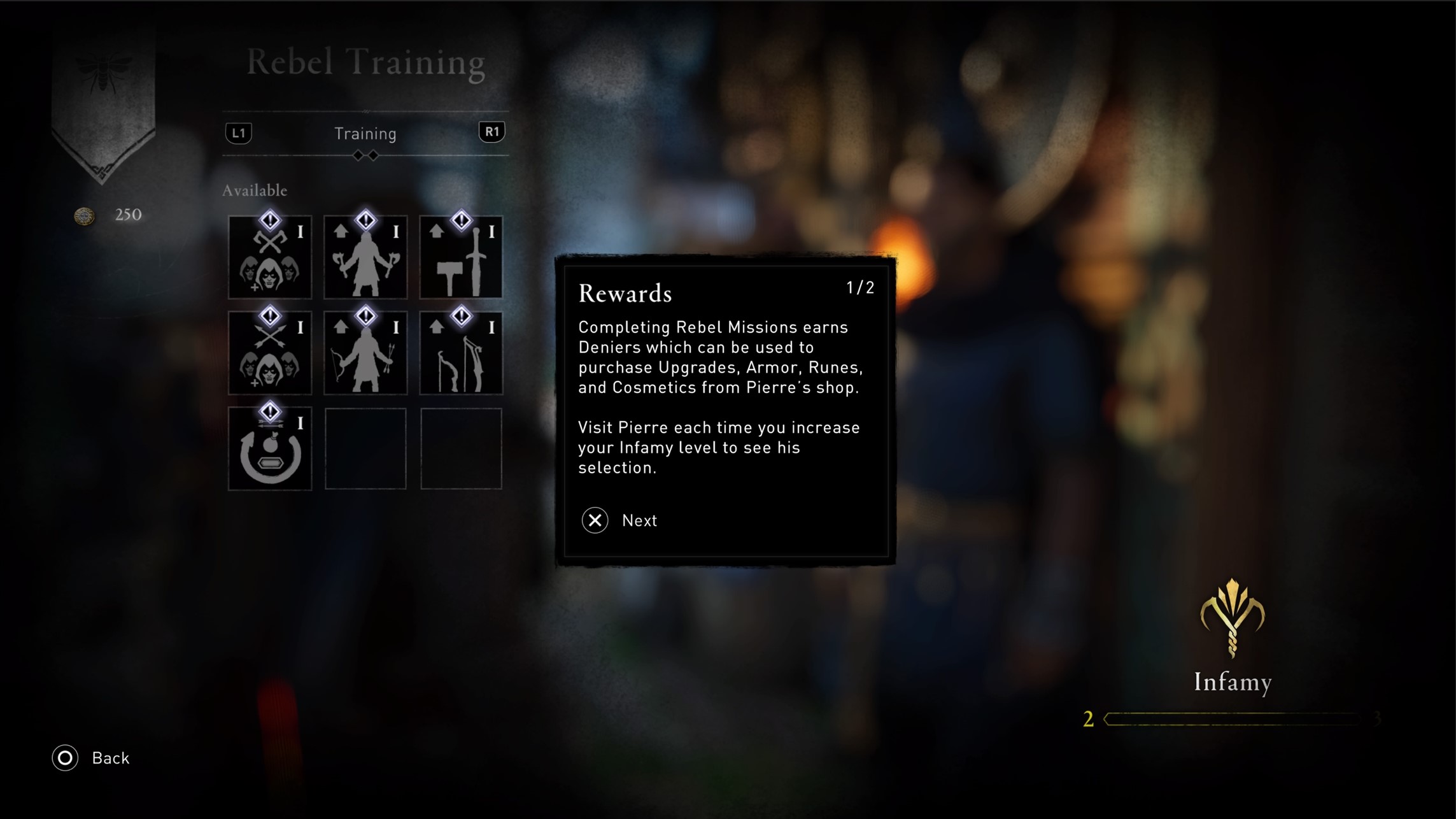 When you complete Rebel Missions, you get special currency based on the difficulty of the quest and your performance. 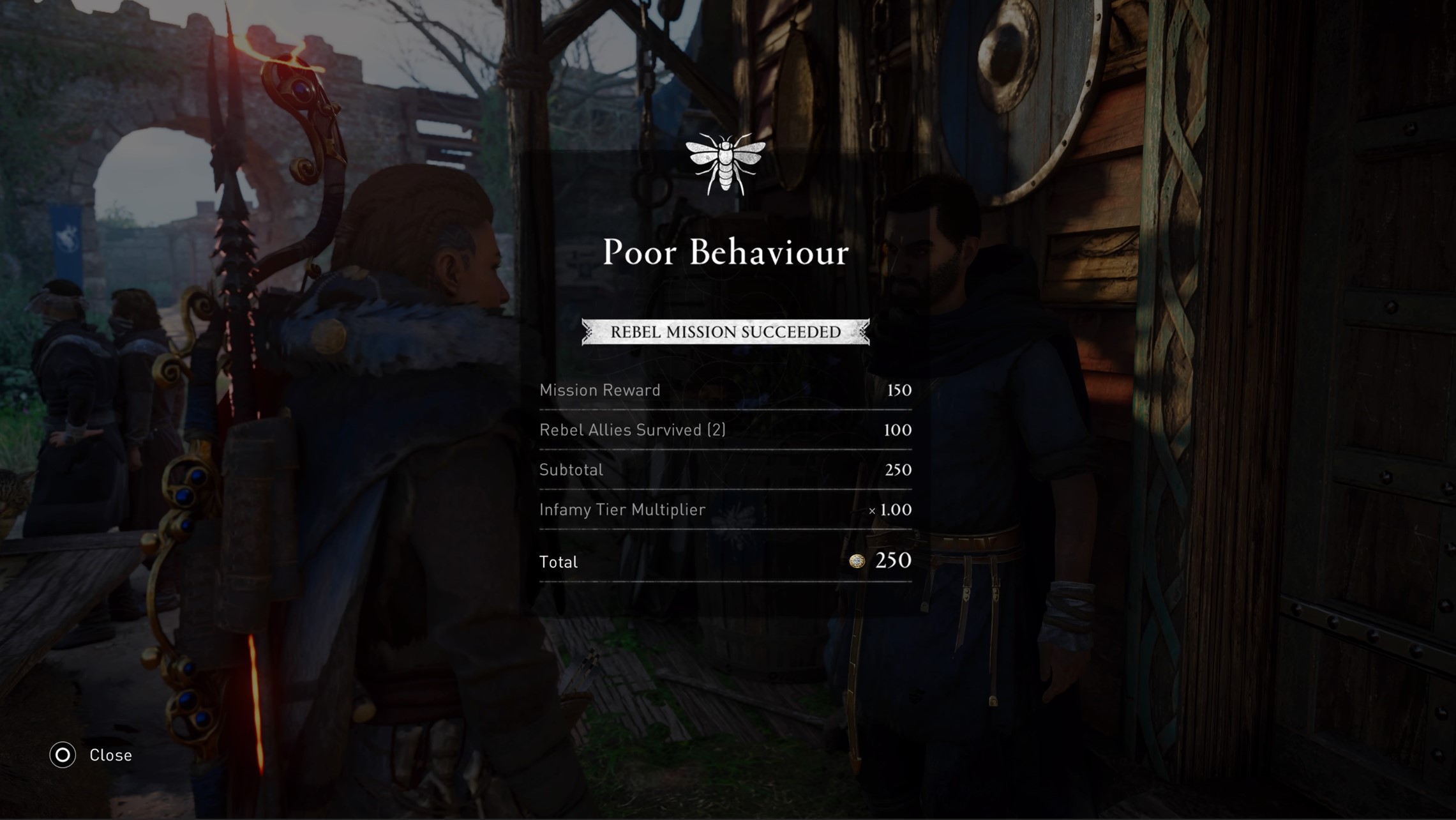 You can spend this currency on upgrading your companions, or to buy yourself powerful Runes or the Reaper armour set.

Personally, I like to use Ranged AI companions. Since you get more money per Rebel Mission based on how many of your friends survive, I like to keep them at a safer distance while Eivor takes most of the aggro. That way, I can maximise the coin rewards.

While the Reaper set might not have the best perk, it’s a very cool addition to your roster when changing the appearance of your other armour sets. 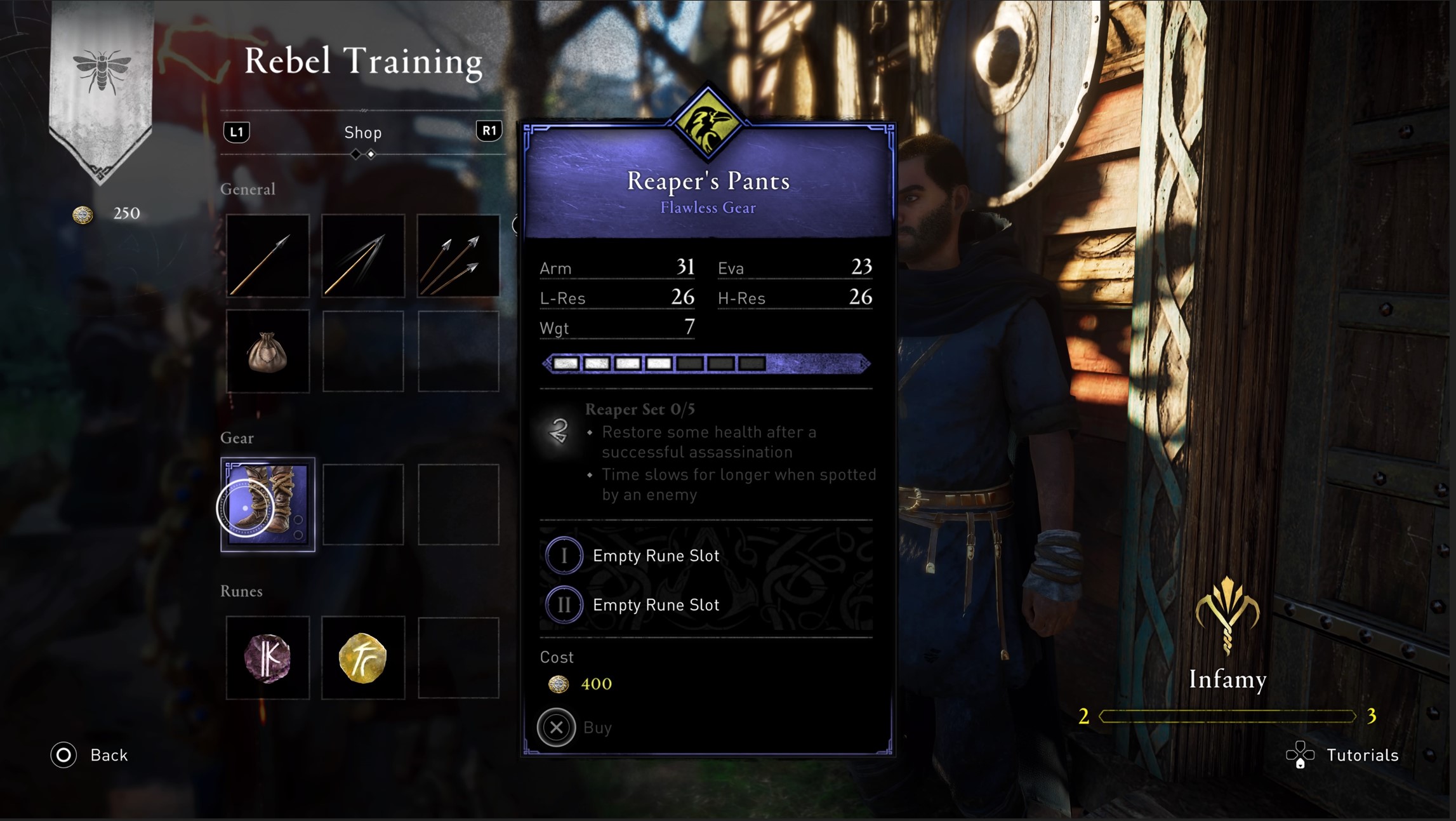 You will probably find more utility in the special Runes that Pierre sells, which can give you the unique perks of DLC loot as well as combining popular regular affects.

By the time you hit Infamy level 4, you’ll have unlocked everything Pierre has to offer you – including the full Reaper set and suite of Runes.

For more on how to spend your time in Francia, here’s where you can find the Frankish Nobles.

Or if you’re more loot-minded, here’s how to complete the Hidden quest to scour the Siege of Paris DLC’s Roman Excavations.