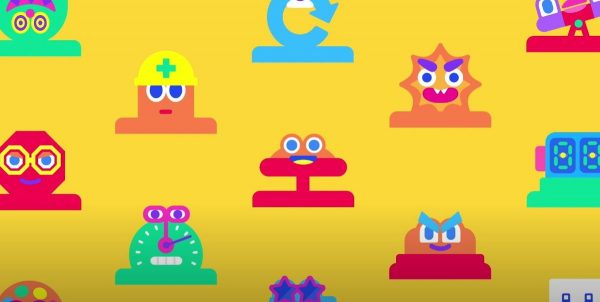 To get something out of Game Builder Garage you’ll need to be willing to learn – but if you are, you’ll find the education it offers most rewarding.

Game Builder Garage is surprisingly complicated for a Nintendo game. It can be overwhelming, and difficult, and surely can easily teeter into frustration from time to time. But… that’s game design, isn’t it? When it comes to giving beginners an overview of the process of building a game in a fun, educational way, Game Builder Garage might be one of the best efforts yet.

The promise of learning to make games from the team at Nintendo is of course a hugely enticing one, for who knows more about the medium than the magicians there? These people made Mario.

In real terms, Game Builder Garage hasn’t dropped out of nowhere. Thematically it is a natural evolution of user creation ideas expressed in Mario Maker, and in reality it is a direct successor to some of the tools experimented with by the Nintendo Labo games. Labo featured Toy-Con Garage, where you could use light-touch programming to bring your cardboard creations to life with small games. The visual style of Toy-Con Garage is continued here, as is the name – but it’s deployed instead in a fully-featured video game creation suite that also feels like something of an answer to the likes of Sony and Media Molecule’s Dreams.

Game Builder Garage feels more focused around the creation than experiencing the work of others, however. Notably, there are no built-in sharing or discovery features in the game. Instead, the only way to download the creations of others is to track down external posts about cool creations through things like the #GameBuilderGarage tag on twitter or from a GBG subreddit; from there you can pull download codes that, when punched into the machine, let you play the creations of others. This seems like a fairly simple and borderline cynical way to prevent Nintendo from being held responsible for the contents of others’ games – and while it sorta sucks, it doesn’t dampen the experience too much – because it really is all about creation. 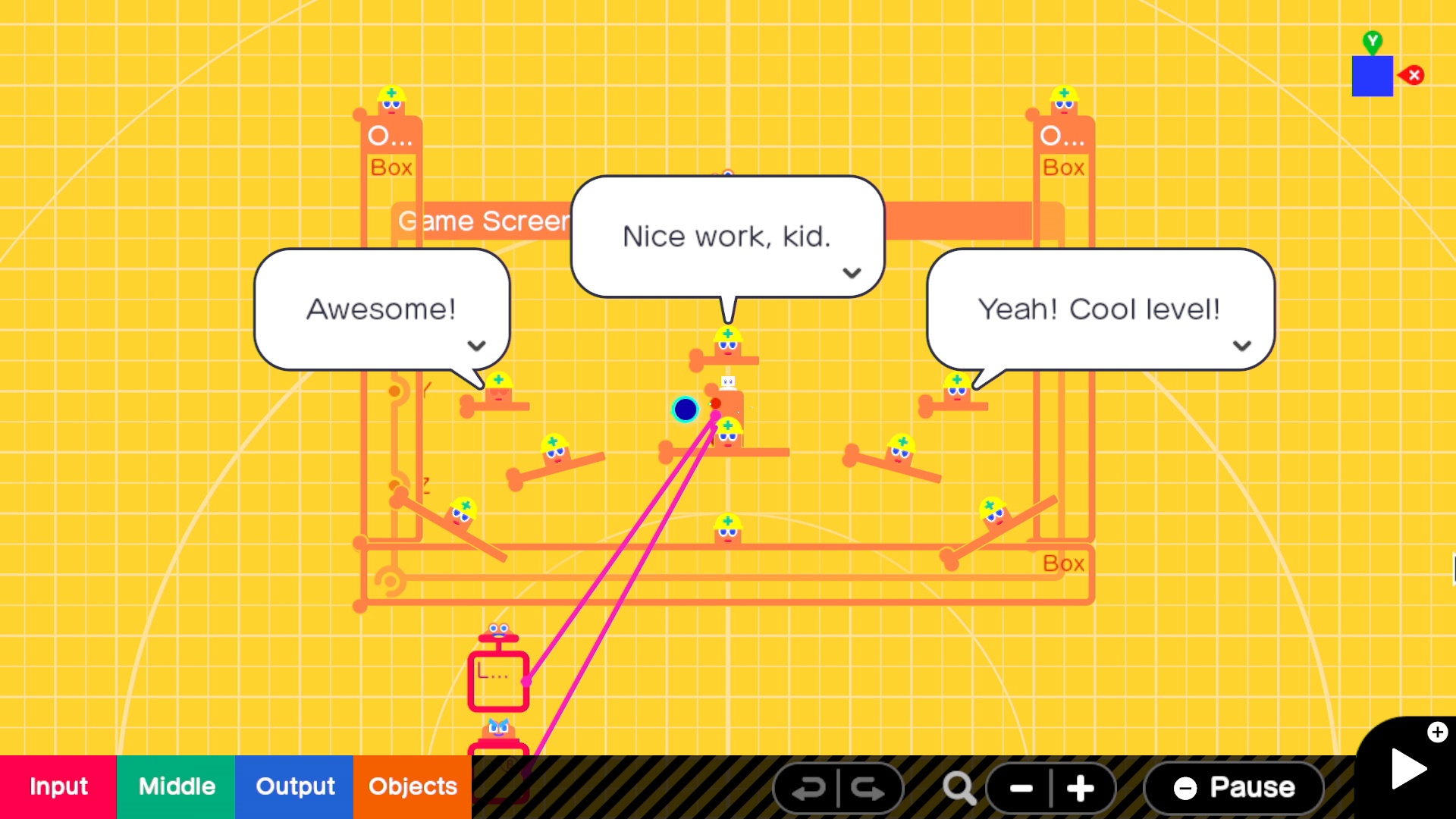 That is so much the case, in fact, that Game Builder Garage doesn’t even ship with any example games to play. Mario Maker came with pre-built levels from Nintendo – this has nothing. Instead, there are seven tutorials, each of an escalating difficulty and complexity, and each that’ll result in a specific genre and type of game, as designed by Nintendo.

You learn by doing – so if you want to play Nintendo’s demos to show at a base level what Game Builder Garage is capable of, you’ll need to build them yourself. It’s a lot like putting together a Lego set, where you follow step-by-step instructions but slowly begin to anticipate the next steps in excitement as your understanding of the toolbox grows. You can’t break free of the tutorial at any point until the end, where Game Builder Garage encourages you to add a personal touch – but you can of course apply the lessons learned in each to your own creations, or use Nintendo’s game ideas as a basis to build something far more complex.

If you follow the instructions without issue, completing all seven lessons and the understanding-checking interactive quizzes between them should be a good ten hours of content or so, and from there you can then hop into creating your own games proper.

The tool set at your disposal is given a typically Nintendo twist, with every single element in the game given a character of its own. The reset button is a sad, depressed soul that constantly wants a do-over, for instance, while the action buttons are bouncing, eager individuals that are desperate to be hammered during gameplay. Rather than learning and writing code, it’s all about the connections between these various individuals, which in-game are known as Nodon.

Each Node(on) can be attached to others, and you’ll end up with a baffling-looking spider’s web of connections by the time you have a working game – but if you follow the lessons and pay attention, you’ll understand what each connection means. Game Builder Garage is like being an operator in the Matrix; at first what is on the screen is apparent nonsense, but after a while you’ll simply see the real meaning. For a kid with the right mindset, I could easily see this game being a catalyst, a major life event that sends them off down the path of studying to become a game developer. For an adult who has always had aspirations, there’s enough depth here to satisfy one’s curiosity and tax one’s brain. 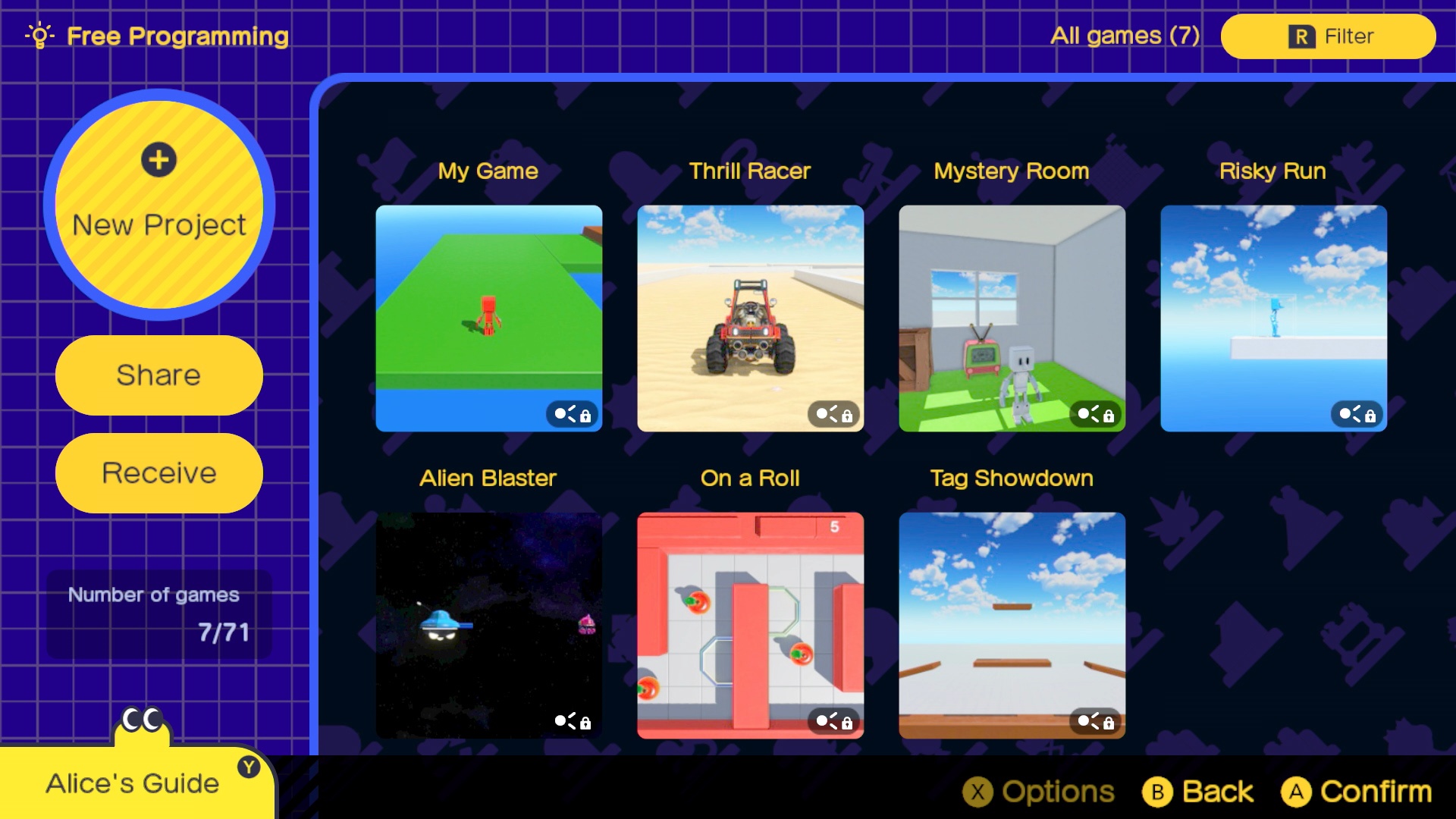 What can be accomplished with these tools is already impressive; 2D side-scrollers, 3D racing games, and even fully-fledged 3D platformers. The texturing tools allow you to create detailed assets or simply work within more simple constraints, and we’ve already got people building clones of classic games and original new ideas en masse just a few days from release.

It’s true that what’s on offer here will never allow creations as in-depth as Dreams or truly detailed PC tools, but there’s also a hell of a lot of complexity here – something Nintnedo quietly admits with its out-of-character addition of full keyboard and mouse support. When you do begin building and see things come together, Game Builder Garage feels about as rewarding an experience as they come.

It does feel like it’s all about the building, though. The lack of sharing tools does somewhat dampen how impressive the creation suite is – though the ability to share at all via download codes is at least present. Even if you don’t prove to be much of a creator, there’s going to be plenty of ingenious stuff on offer – you’ll just need to have a computer or phone next to your Switch for finding them.

Game Builder Garage seems to want to showcase just what it’s like to make a game, albeit in a simpler way. It’s sometimes challenging to the point of being headache-inducing. It is unrelentingly complicated. When it clicks, however, it’s fun, magical, and incredibly rewarding.