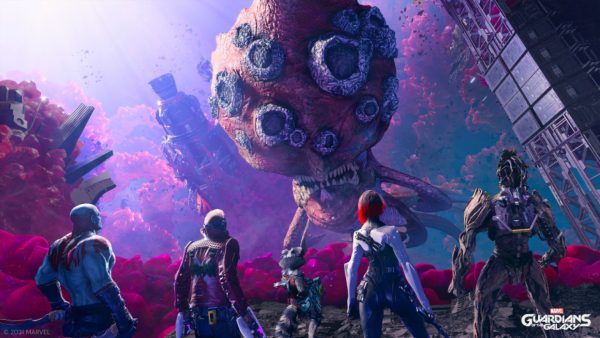 Square Enix and Eidos Montreal game, Marvels’ Guardians of the Galaxy, is going to focus on the single-player experience and will provide a fully realized game at launch.

Guardians of the Galaxy kicked off the Square Enix E3 2021 show, and it impressed Marvel fans the world over. But perhaps the most interesting bytes of information were left out of the main showcase: the developers have confirmed there’ll be no DLC and no microtransactions.

It looks like Eidos and Square Enix really want to make this a triple-A single-player experience, and unlike the recently re-revealed Babylon’s Fall (which will be a live service game), the company wants to keep this launch simple.

“That’s because, for us, it’s very important that on day one, when players get this game, they can have access to everything there is about this game and to experience it,” she told the site. “Right off the bat, they can get all of the costumes or outfits that are available, they can find all the abilities as they progress through the game. It’s all there.”

The game is largely influenced by the comics of the same name, and will cast you as Peter Quill as you “unintentionally become the galaxy’s first and last line of defense”.

It sounds world’s apart (no pun intended) from Marvel’s Avengers – which Square Enix apparently wants to revive with reams and reams of DLC – so hopefully Guardians of the Galaxy will appeal to a wholly different audience and stick the landing at launch a bit better than the publisher’s previous Marvel property. If you still care about Marvel’s Avengers, you’ll be pleased to know that the Black Panther: War for Wakanda expansion is coming in August.

The post Guardians of the Galaxy is single-player only, has no DLC and no microtransactions appeared first on VG247.