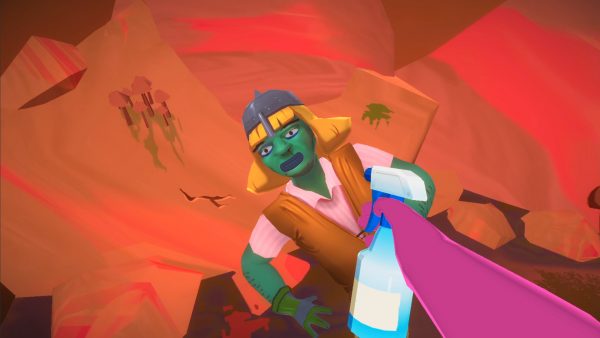 It’s time for developers to stop fishing for likes by having a petting animation in their games, and start inserting overt political commentary instead.

If you follow games Twitter, you’ll likely be very aware of Can You Pet the Dog? The Twitter account has been going on for over two years now, and its only job is to feature games with any petting, or petting-adjacent animation.

With nearly half a million followers, Can Can You Pet the Dog? clearly has reach, and it’s one many game developers have utilised to help promote their work by sharing GIFs and video from their upcoming games where an animal can be seen being petted. It’s all very wholesome, even if it caused some hopeless souls to think that it’s making devs intentionally create the feature just to be featured on CYPTD.

I doubt any of those mentions, however, are as striking or poignant as this clip from The Dungeon Experience, a first-person narrative adventure game by some of the people behind Paradigm, and Ring of Pain.

The video, embedded below, starts out like any standard one of those: with the dev behind the game confirming that you can pet the dog in their game. Things quickly take a turn when you realise that the dog not only speaks, it’s aware of the trend it’s contributing to keeping alive.

You can pat the dog in the Dungeon Experience. pic.twitter.com/lwcab5ig04

The Dungeon Experience will be released “when the four moons of Xogris align and the Messiah Khidrius returns.” You can wishlist it on Steam in the meantime.