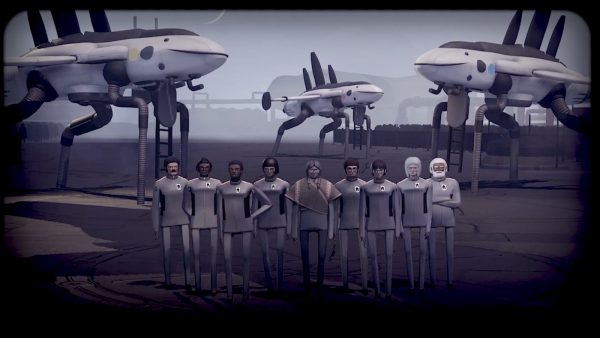 One of the nice surprises on Thursday’s State of Play livestream was an appearance by Jett: The Far Shore, the new game from Sword & Sworcery’s Superbrothers.

Jett: The Far Shore was first unveiled over a year ago on a different State of Play, but this week’s trailer brought our most detailed look yet at its gameplay. The game chronicles the events of an interstellar civilization searching for a new home.

You play as a pilot scientist, who’s asked to explore the planet in search of the signal that brought your people there in the first place. Unlike most space games, exploration is the main mechanic in Jett: The Far Shore. The challenge is that you need to scout the landscape and catalogue what you come across without engaging in combat with the native flora and fauna.

While the intention is not to disturb local life, you will sometimes need to rely on environmental hazards or trigger natural phenomena to defend yourself. The action is split between flying the Jett, and first-person segments where you get to land and explore the world more closely.

Jett: The Far Shore does not yet have a release date, but it’s coming to PC, PS4, and PS5 sometime this year.

The post Jett: The Far Shore wants you to explore the planet without harming native life appeared first on VG247.