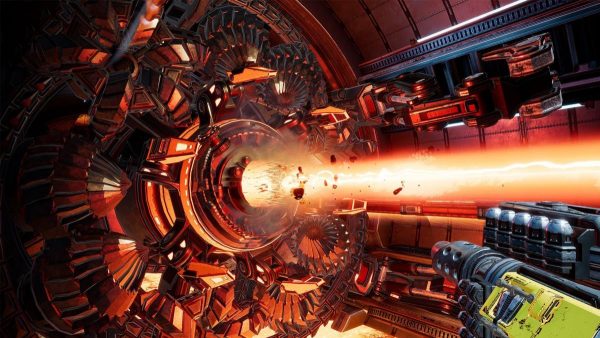 Two titles are free this week on the Epic Games Store, and there will be two more freebies available next week.

This week on the Epic Games Store, you can download Mothergunship and Train Sim World 2 for free.

Mothergunship is a bullet-hell FPS with tons of gun customization options that tasks you with taking on an arobotic alien armada that has conquered Earth. You will fight large bosses, and experience randomized fights as you try to get to the mother ship and destroy it.

In Train Sim World 2, you will drive a German rail and will be hauling long freight across Sand Patch Grade including the Cumberland Terminal using the raw power of the CSX AC4400CW. You will also learn the patterns and stations of the London Underground on the Bakerloo Line. You can also personalize your train with the Livery Designer, where you create your own custom liveries using an in-game tool that allows you to craft both simple and complex designs.

Next week, A Plague Tale: Innocence will be free to download from the store alongside Speed Brawl.

If you are unfamiliar with the former, it follows Amicia and her younger brother through a plague-infested France. During their journey, they will have to contend with rats, the Inquisition, locals, and the British army.

Speed Brawl is a 2D combat racer where you will need to go fast. In it, you will maintain your momentum, build combos, and unleash powerful moves. Set during 1888, the game features six brawlers with their own playstyles, over 50 events, and races across multiple Speed Brawl Leagues. It also features online cooperative play throughout the whole campaign.

The post Mothergunship free on Epic Games Store, A Plague Tale: Innocence is free next week appeared first on VG247.