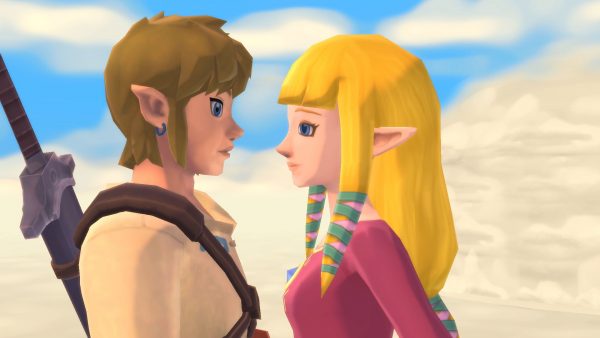 Skyward Sword is actually a little better than I remember it – but it’s no all-timer.

Let’s rip the band-aid off. I’ve been on the record saying it a lot, even on the recent editions of the VG247 podcast-that’s-not-a-podcast: I don’t think The Legend of Zelda: Skyward Sword is a truly great game. In the past, I’ve said that in much stronger and less friendly terms, too – but the new HD Remaster on Switch has me reconsidering my stance somewhat.

I’m not going to do a complete u-turn, though. I’ve said in the past that I think people who reviewed Skyward Sword and gave it such high scores that it managed a baffling 93/100 on Metacritic need to go have their head checked for a major concussion or something. It’s a deeply flawed game that was the last in a trilogy of deeply uneven 3D Zelda games on the GameCube and Wii. It remains that in this new format – but in some areas, my opinion has softened.

More than you’d perhaps feel from a rerelease of its also flawed siblings Wind Waker and Twilight Princess, Skyward Sword feels like a product of its time. Even its name hints at its gimmick – referencing not just the skies Link traverses on his adventure but also the action of raising a sword skywards to perform the game’s motion-controlled signature move.

It’s difficult to play Skyward Sword HD and not constantly feel the foibles and difficulties of that era of gaming. On paper, the idea of having direct sword control is thrilling, and leads to some truly interesting enemy encounter design and great puzzles. These are moments, though, and a lot of the time you’ll also be struggling with the controls or simply spamming your way through it with a less than accurate wriggling of your wrist. 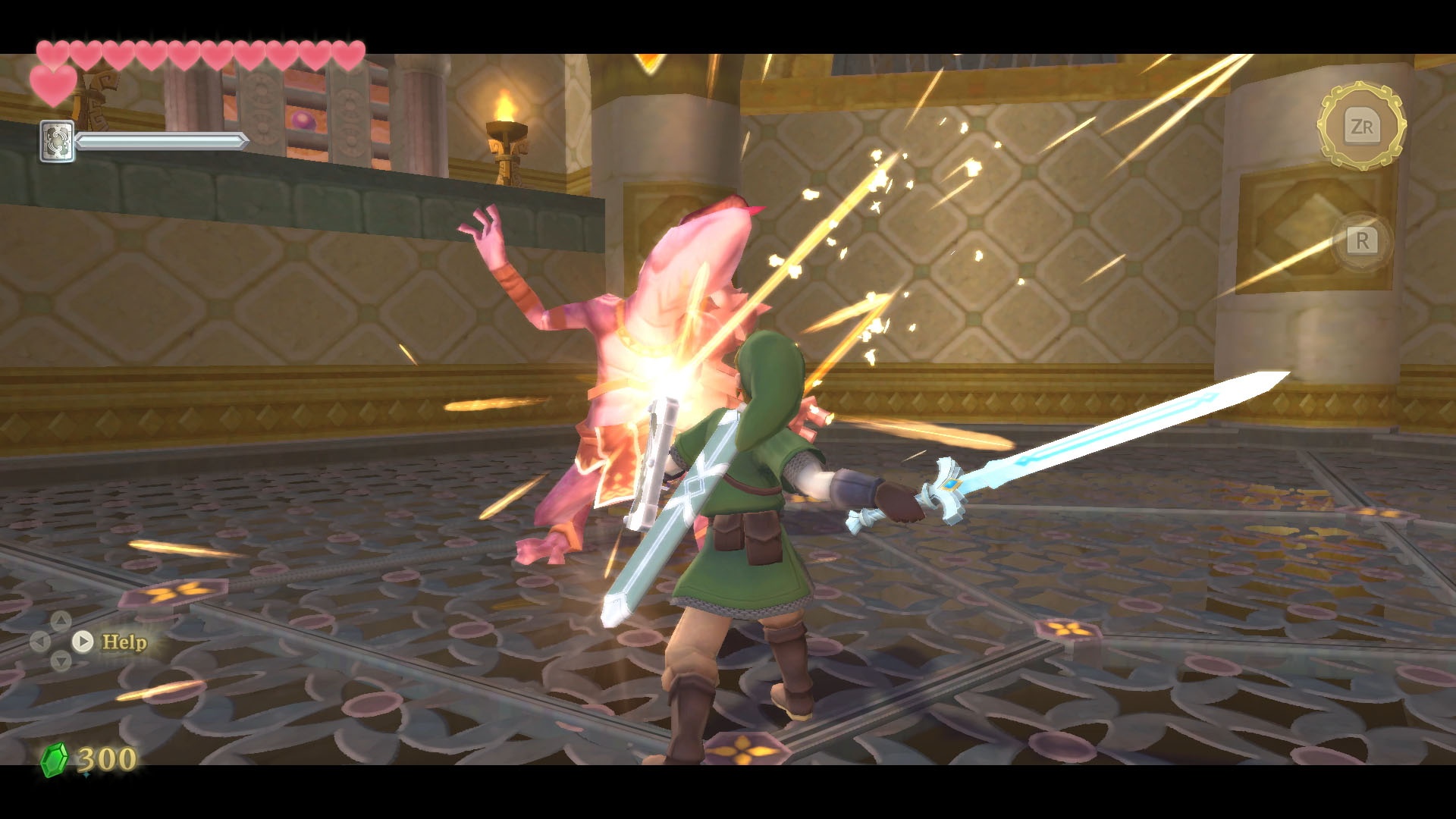 One big addition for the HD version of the game on Switch is the ability to play with button controls. This basically maps the right analogue stick to Link’s Sword – so you still have direct 1:1 control, but you’re simulating the movements you’d make with your hand on the thumbstick. It works really well, and Skyward Sword is structured in a way where the early parts of the game are fairly light on combat – which gives you ample time to ease your way into whichever control method you prefer.

This was my preferred method of play, but it comes with a hefty cost. New to this version is a completely free camera that is – you guessed it – controlled with the right stick. When using motion controls, you have constant control over the camera with a flick of that stick, which is great. In regular control mode, you can only tilt the camera when holding the R button, and obviously tilting the camera and using your sword are mutually exclusive activities. As a result the free camera isn’t very useful at all when not using motion, and you’ll instead find yourself using the lock-on button to constantly re-center the camera – something that was a major drawback of the original Wii version of the game.

When you look past the controls, however you might feel about them, many of the other quality of life adjustments are strong and additive. Sidekick Fi is now less chatty, with much of its nagging dialogue able to be triggered with a press of a button if you need some help. Cutscenes can be skipped, but better still dialogue boxes can be sped up by holding the B button. If you know what you’re doing, tutorials are skippable. The game no longer tells you the value of a Rupee every damn time you pick it up. 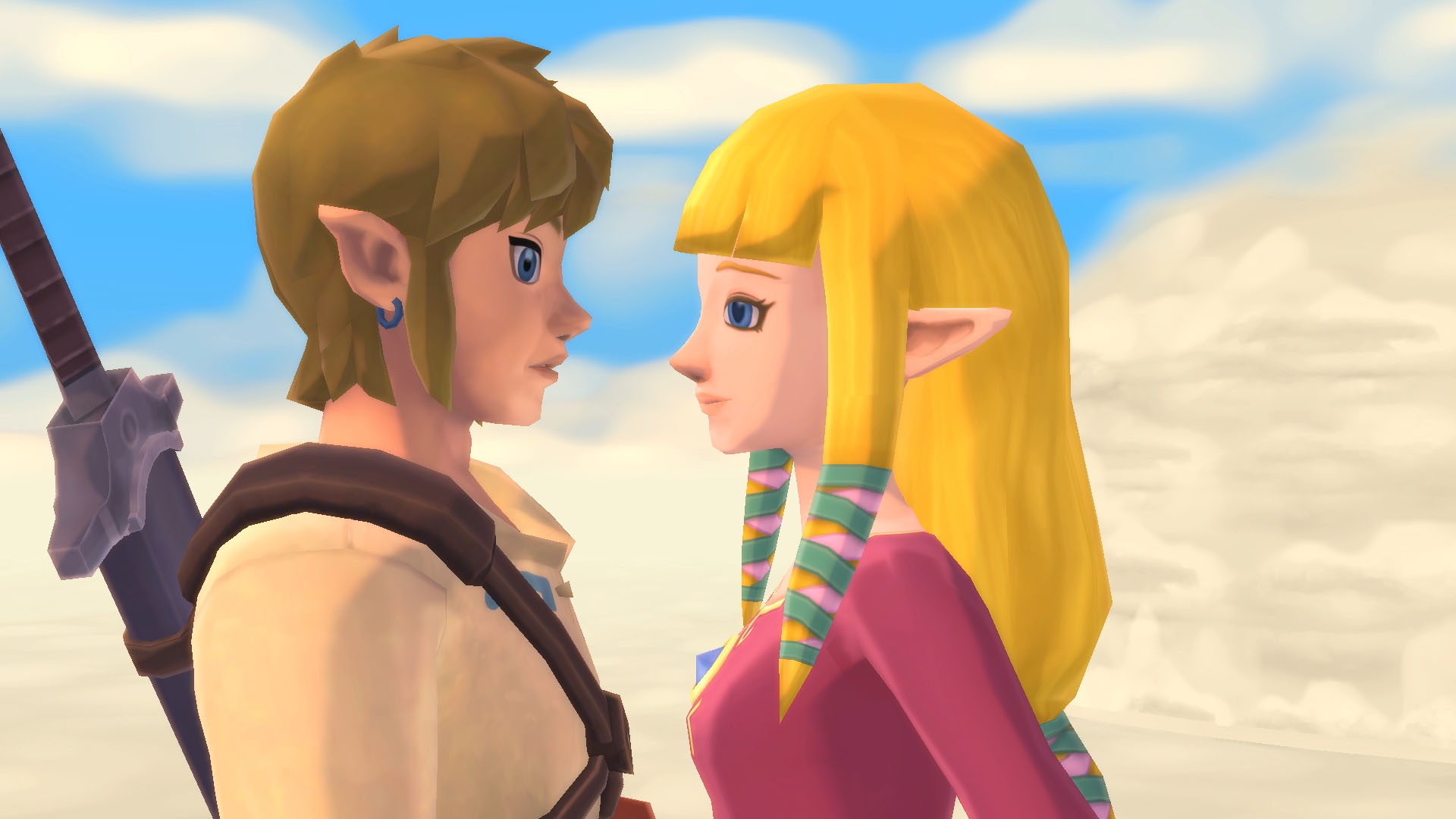 In this, a lot of the fluff that plagued Skyward Sword and made its pace utterly glacial has been pruned. The fat has been significantly trimmed, and it’s a better game for it. While it’s still absolutely BS that a decent time-saving feature is hidden behind an amiibo, the pace of the game is drastically improved by these changes.

In other places it’s a less impressive remaster, however. Nintendo says the graphics are improved, but it doesn’t seem the most huge of upgrades, comparable to simply running the Wii original in the Dolphin emulator with bells and whistles enabled. The higher resolution presentation arguably highlights the deficiencies of the character models, which have the same sort of ugly uncanniness to them as in Twilight Princess; Nintendo finally nailed the look of non-chibi, high polygon 3D Zelda with Breath of the Wild. Those advances aren’t present here. It’s the game as you remember it.

Except, for me, it isn’t. Or not quite. My memories of Skyward Sword have, until now, been largely muddied by how rough other aspects of its experience were on Wii – but now, on Switch, I appreciate it far more.

Its dungeon design is excellent, for instance. While it follows traditional Zelda tropes, the structure of the game is just different enough to entice and surprise. The sky is no more populous or interesting than Wind Waker’s Great Sea, but there’s still a unique exhilaration to sweeping through the sky on a Loftwing. And here, while wordy and slothenly paced, is the most in-depth story the Zelda series has ever told, trending far more towards anime than any other entry. In this game, Zelda is not just a macguffin, but a character you actually might begin to care about. 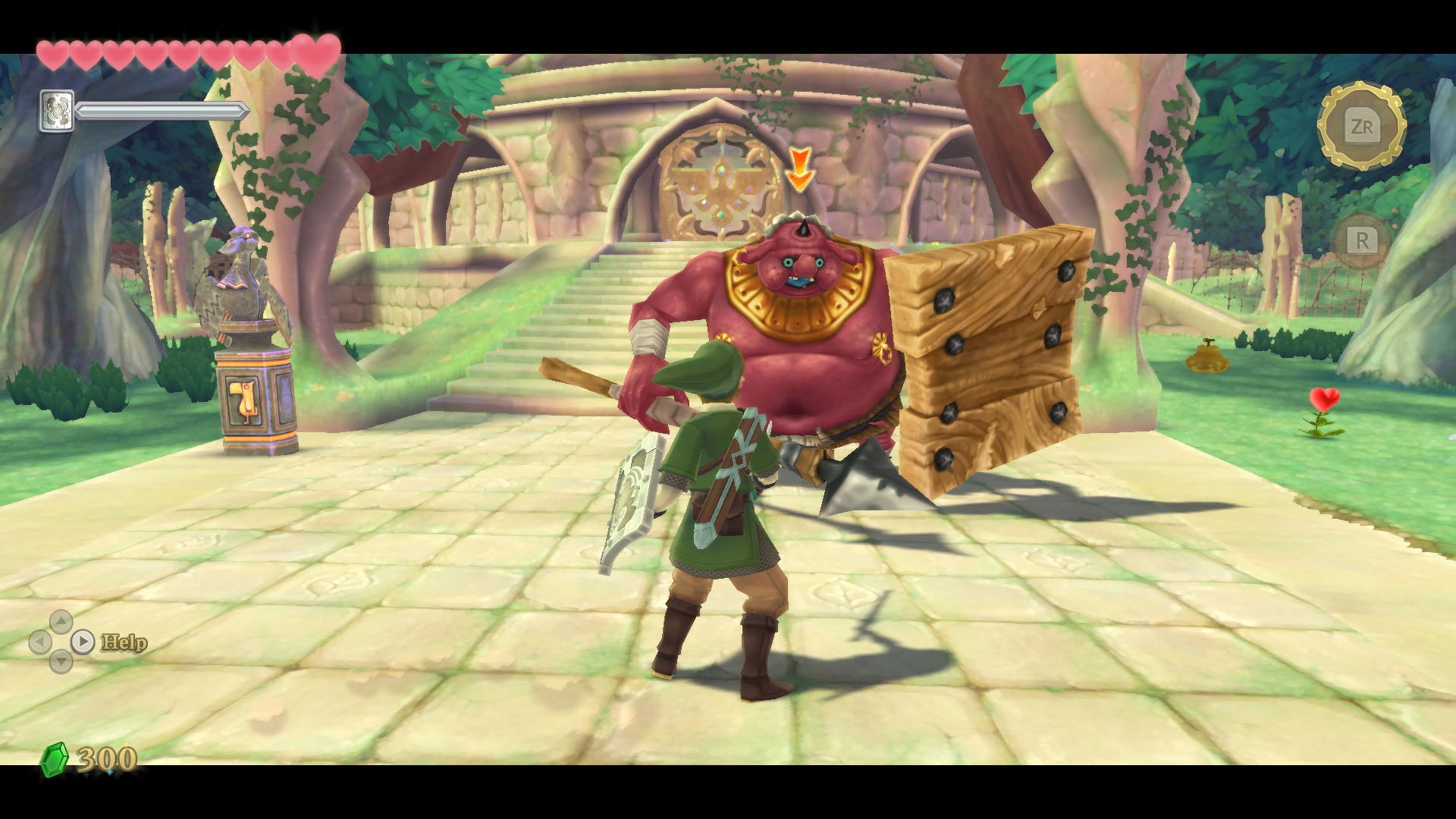 There’s also the Breath of the Wild similarities. What I now appreciate is that there probably would not have been a BOTW without SS; Skyward walked and in some cases just barely crawled so that Breath could run wild. Concepts like stamina, equipment degradation, and the glider all find their feet here. Every one of these feels worse than in the next game; the sailcloth is perhaps the best example in that it doesn’t feel good to use – it’s functional, but stiff and boring, whereas its BOTW successor, the paraglider, is dynamic and thrilling. But one still has to appreciate its origins here.

As the first 3D Zelda I’ve replayed since BOTW, I’m also enjoying the elements of classic Zelda that are present here, like more traditional dungeon design and a Hyrule more focused on the granular detail than the bigger picture. Skyward isn’t exactly smaller in scope than the games that came before it, but the limited nature of its controls mean that there’s restraint in almost every other aspect of its design – which gives it a fairly unique flow and texture that I now appreciate much more without Fi interrupting me every thirty seconds.

I haven’t finished the game yet, which is why this isn’t a scored review – but with every additional hour I spend with Skyward Sword HD, my appreciation for the game and respect for what its team was attempting rises. It’s not a perfect ten, or even a nine, but it’s also not a bad game. It might be one of the worst Zelda games simply on balance of the various compromises made to make that core motion control feature work – but one of the things that makes Zelda special, I suppose, is that a lower-tier Zelda is still a pretty good game in the grand scheme of things. Except those CDi ones, obviously.

The post Skyward Sword HD is giving me a newfound appreciation for what was previously one of my least-favorite Zelda titles appeared first on VG247.