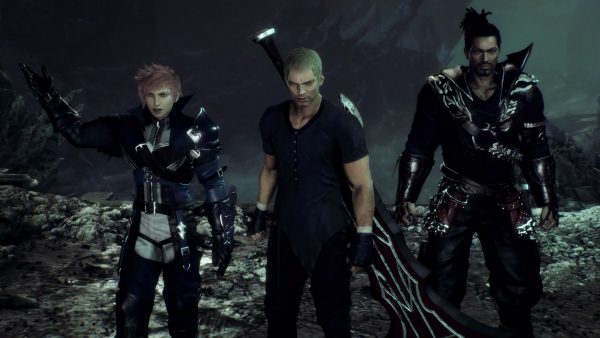 Speaking in an interview with Weekly Famitsu, Stranger of Paradise: Final Fantasy Origin’s creative producer Tetsuya Nomura, producer Jin Hujiwara, and director Daisuke Inoue spoke about the game, and how it’s using the original Final Fantasy as a motif.

According to Nomura, the game is based on Final Fantasy 1, where at the end of which, you learn who the Warriors of Light really are and where they came from.

In Stranger of Paradise, Jack and his friends are under the impression they may be Warriors of Light, yet they have doubts sometimes as to whether or not they are – as a prophecy has foretold.

Nomura also states the trio are “strangers” which is central to the plot as the trio has gathered in Paradise, which according to Inoue, means “exactly as what it says.”

“Strangers of Paradise means exactly what it says that these strangers are in the land of Paradise,” added Inoue. “At the same time, it could mean people who shouldn’t be in Paradise. I think it is a title that represents the story of the game perfectly.”

In the game, Jack and his allies are on a mission to defeat Chaos, and some folks may recall there were four Warriors of Light in the original Final Fantasy. According to Nomura, there will be more characters than just Jack, Jed, and Ash, but when it comes to fighting, battles will be limited to three party members.

As far as more information on the characters is concerned, the developers are keeping most of the story and gameplay elements close to their chests.

“In the full game, there will be even more characters, the game will be a lot broader, and I think the story is quite compelling,” said Nomura. “It might be a bit confusing to see these characters come out of nowhere, completely unlike anything you were expecting, but I hope you’ll keep an eye on upcoming information.”

So if you want any sort of idea of what to expect, you will need to play the PS5 demo, because for now, the team is only revealing information from the trial version, which only covers the beginning of the game.

The team really wants you to provide some feedback once you finish with it too.

“It’s a game trying something a little bit different, so I fully expect to receive a wide range of feedback,” said Inoue. “I’m sure that everyone’s thoughts on the trial version will help us to dramatically improve the quality of the final game, so please do give us your feedback.”

“The story is only touched on very briefly in the trial version, but once it unfolds, it’s a very impactful story that will really hit you emotionally,” added Fujiwara. “Please look forward to the game and keep an eye out for further news.”

According to Fujiwara, there was an unexpected issue on the first day the trial version was released, making it unplayable. Because of the issue, the trial period has been extended by another two days, meaning you have until June 26 to give it a try.

Stranger of Paradise: Final Fantasy Origin is slated for a 2022 release on PC, PS4, PS5, Xbox One, and Xbox Series X/S.

The post Stranger of Paradise uses Final Fantasy 1 as a motif rather than being “directly connected to the game” appeared first on VG247.