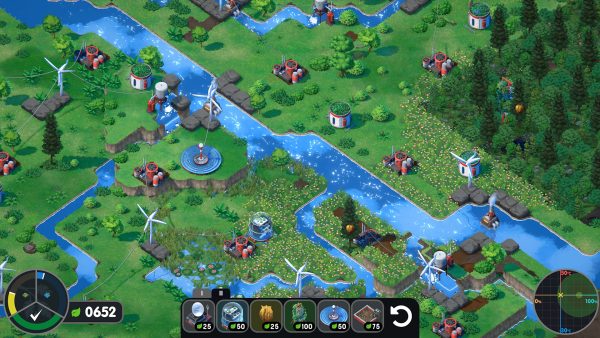 Publisher Devolver Digital and developer Free Lives have announced Terra Nil; a city-building game with an emphasis on restoration, not expansion.

Usually, city-building games are pretty draconian in their expectations of you: consume natural resources and expand your empire, or you fail.

Whether you achieve your resource-hoarding goals by reaching late-stage capitalism, exploiting the labor of your workers, or simply brute-forcing your way to the top, these games aren’t the most ecologically conscious things in the world.

Enter Terra Nil; a new effort from the Broforce developers that intends to flip the genre on its wantonly consumerist head.

“The open-ended strategy progresses through multiple stages of restoration, including cultivating biodiversity, fixing the climate and even recycling the buildings players used to get there,” says a press release for the game.

In order to succeed, you’ll need to traverse the planet, restoring different geographical regions, each with its own unique challenges to overcome, and its own flora and fauna to take into account.

“Navigate sprawling, procedurally generated maps with lush hand-painted environments where everything but the rocks move and breathe,” the release continues. “Restore the world’s climate, with unique weather patterns for different regions and a beautiful and meditative reactive soundtrack and audio palette.”

It certainly sounds like a breath of fresh air (no pun intended) compared to the overt industrialist trappings of its genre stablemates.

The game will launch on Steam ‘soon’, but currently does not have a set release date. Check out its Steam page here.

The post Terra Nil is a city-builder about ecological restoration, not expansion appeared first on VG247.