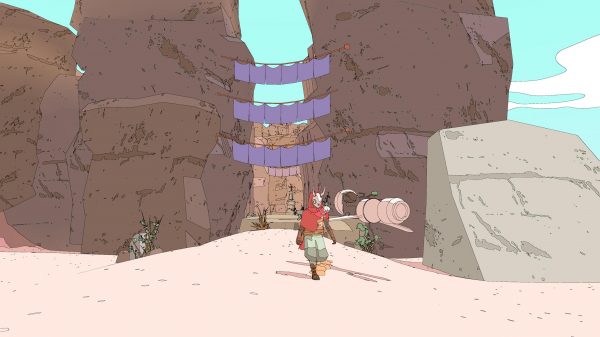 Sable has reemerged with a lovely new look at gameplay.

Sable, the action adventure with a very Moebius-inspired art style, has been fairly dormant since it was revealed. With only one or two updates per year, Sable has been more mysterious than we would like.

But it looks like the 2021 release target will hold, because developer Shedworks is starting to show the game off again. The latest trailer presents 13 minutes of gameplay, offering our most detailed look at the game yet.

Seen above via IGN, the footage shows the early moments of the game. We get to see general exploration of the game’s expansive desert setting and the breath-taking ancient architecture it hides. You’ll be doing more than just taking in the sights in Sable, because there’s a fair bit of the footage showing conversations with NPCs and some light platforming.

The highlight of the experience is unquestionably riding through the game’s environments on a hoverbike.

One of Sable’s most striking visuals is its character animation. Creative director Gregorios Kythreotis confirmed on Twitter that the game will only run at 30fps, though the team is considering offering a 24fps option. This may upset some people, but it is the direction the team is going with.

Seen some people bring it up so a little psa for people who care – for a bunch of reasons, the game runs at 30 fps, we will explore having an option at 24 fps just for fun but default is now 30 fps

Sable is coming to PC, Xbox One, and Xbox Series X/S sometime this year.